Brand new to silents? Wondering where to start? This section has quick, bite-size info on films, performers, directors, etc. 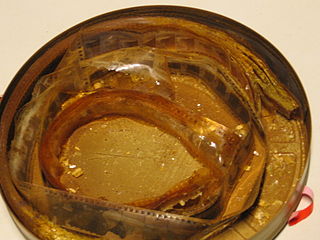 Decayed nitrate film reel at EYE Film Institute Netherlands. From Wikimedia.
Film Loss
If a film is no longer thought to exist in any known archive or collection, it is considered lost. Unfortunately, this phenomena is all too common to lovers of silent film: various estimates place the rate of film loss for this era from 75% to as high as 90%. Due to its chemical instability and extreme flammability, nitrate film stock (the standard for 35mm prints before the introduction of safety film stock in 1949) can spontaneously combust when improperly stored, or simply degrade and crumble into dust.

In 1937, during the midst of a heat wave, a fire erupted at a New Jersey film storage facility owned by 20th Century Fox; not only was nearly all of the studios pre-1932 output now lost, but prints from other studios held at the facility were also destroyed. Educational Pictures lost nearly 2000 of their silent films in the fire. The filmographies of actors such as Tom Mix (who acted in over 80 films for Fox) and Theda Bara (the majority of whose films were produced by Fox) suffered heavy losses. In the case of Valeska Suratt, her entire career is sadly lost.

Another vault fire occurred in 1965 on an MGM backlot in California. All of the contents of Vault 7 were destroyed, the most notable being Lon Chaney's London After Midnight (1927), considered one of the holy grails of lost film.

But the most common - and the most frustrating - reason for film loss was intentional destruction. Many studios had no thought of preserving their old silents after the introduction of sound; deemed worthless, many were simply junked by dumping them in landfills or into the ocean to free up space, or sent away to be recycled for their silver content. 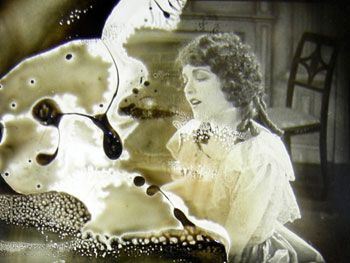 A decayed frame from the rediscovered Maytime (1923).
Film Rediscovery
Yes! Luckily, films that were previously considered lost have occasionally been found. There are all sorts of ways they have been rediscovered: after being mislabeled or simply tucked away in an archive, in someone's private collection, saved from a rubbish heap, an abandoned building, found in an antique shop, etc.

In 2009, a trove of 75 films dating from between 1898 to 1929 long thought lost were found in the New Zealand Film Archive (which has since become Ngā Taonga Sound & Vision). Among the films were Mabel Normand's Won in a Closet/Won in a Cupboard (1914); The White Shadow (1923), which was partly directed by an uncredited Alfred Hitchcock; Maytime (1923), an early film of Clara Bow's; and Upstream (1927) directed by John Ford. They were later repatriated to various film archives in the United States.

There's hope to be had! There are new films being found every year. Nitrate decomposition is a merciless beast that can really take its toll, and rediscovered prints are often not in the best condition. But just being able to recover even a scrap of these films is a miracle by itself. Check your basement or attic!

Some more examples of rediscovered films and where they were found:

Beyond the Rocks (1922): Found in 2003 in a collection donated to the Nederlands Filmmuseum. 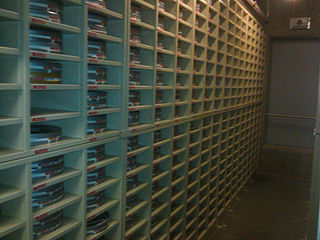 Film vault at Packard Humanities Institute, Santa Clarita, California. From Wikimedia.
Film Preservation & Restoration
Usually, extant films are housed in archives. There, archivists work to preserve their holdings. The five biggest archives in the United States are the Library of Congress, UCLA Film and Television Archive, the Museum of Modern Art, the George Eastman Museum, and the Academy Film Archive.

Films are stored in a cool, dry environment in order to slow decomposition. The vaults for nitrate are climate-controlled, kept around a chilly 40 F and 30-50% relative humidity. Physical damage such as tears, scratches, etc. may be repaired, and the film element copied onto a more stable stock to make an archival master. Kept in the right conditions, these prints can last centuries.

Films are also restored. With restoration, a film is returned to its original version as closely as possible. Ideally, the original camera negative - the actual negative that was inside the camera on set - is the source for the restoration work; if the negative no longer exists, a composite restoration negative is created.

The cost can vary depending on the film and the scope of the restoration work, but it can go into the tens of thousands. It can get very expensive. For the restoration of Wings (1927) a decade back, Paramount spent around $700,000!

The National Film and Sound Archive of Australia has a great article on conservation treatment, if you want an in-depth look.
"Some people travel through life making friends wherever they go, while others — just travel through life." ~ Go West (1925)
Top
Locked
3 posts • Page 1 of 1